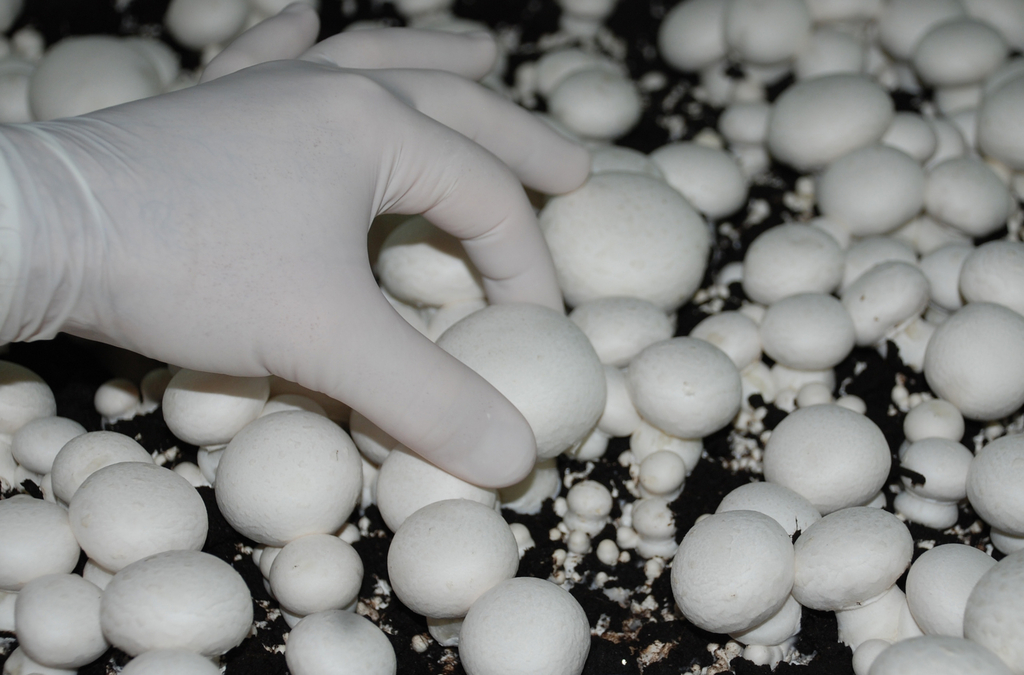 Adelaide Mushrooms is South Australia’s largest mushroom grower with its original farm at Woodcroft and building an new farm at Monarto. The company is owned by the Schirripa family. With the commissioning of the new facility built by Christiaens in January, the Company’s production has risen from 38,000kg to over 60,000kg per week of fresh mushrooms on the current site as the spawn running rooms were converted to grow rooms.

When the next phase of building is completed at the new farm, the Company will produce in excess of 140,000 kg per week and it is still intended to maintain its strong quality policy to maximise market return. After completing the Phase 1 bunker composting system, Adelaide Mushrooms embarked on nine Phase 2/3 tunnels, which were linked into the Phase 1 shed by conveyor. It is a complete system, which allows the emptying of Phase 1 direct into Phase 2 in a matter of minutes and then Phase 2 into Phase 3 similarly.

The facility has a capability of producing up to 420 tons of Phase 3 substrate. The project which was planned from start to finish has the distinct advantage of the whole operation from Phase 1 through to growing will be done in sequence and with the minimum of handling. It will be “production line” and as efficient as it can get. Everything will be linked continuously from start to finish with no man handling, no transport: that is with the minimum of expense and maximum efficiency.

Chairman Douglas Schirripa of Adelaide Mushrooms:
“The flooring was all layed by us in readiness, and then the Christiaens group flew in and were able to complete the total project in 5 months from beginning to end with the minimum of fuss and delay.” “It was a giant project to ensure everything was here on time and ready for construction. The Christiaens Group are to be complimented on the liaison to ensure this all happened like clockwork!” “Being so far away from all suppliers way “down under” in Australia, it was important to ensure we were able to get the best possible plant, equipment and ongoing service.” “More importantly it was the openness of discussion and viewing of their plans, which gave me the confidence to go with the Group. Al this was done with confidence in the confidentially of our discussions.” “I would highly recommend their services and would not do it any other way after this experience!”

Project
The current project included the building of 30 grow rooms each with 4 rows each of 6 shelves high and 1.2m wide and a capacity of 778m2 growing area. Two of the rooms were halved by putting a wall down the middle giving four rooms for research and development. There is a central alleyway 10m wide to allow for easy movement of product from each room to the central check station and cooling facilities via a central conveyor system.

There is also extensive storage area, amenities, operating offices, a training room, pre pack facilities and a spacious lunch room. Cool room facilities for 200 pallets, 2 vacuum coolers, a central air duct are all part of the advancement of this project. The plant room is centrally located as are the cooling facilities and amenities block.

Production
The project built by Christiaens was planned to be done in two halves. The first half included all the amenities, plant room and cooling facilities and once this was completed, production commenced filling two room a week while the second half was being built. This began in March 2009. The main build of the facility was completed in June 2009 and after shelves were erected and some fine tuning of plant and equipment the Companycommenced full production in November 2009. From April 2010 the Company has been averaging around 110,000kg per week and it is anticipated to level out on full production at 132,000kg per week.

Note:
Adelaide Mushrooms is a supplier of fresh mushrooms to supermarkets,retailers and Institutions and 100% is sold on the fresh market. The Company suppliers all states of Australia with a heavy input into South Australia, Western Australia and Victoria, and is recognised as a leader in the quality stakes in Australia for a number of years. Currently 100% is sold in loose 4kg boxes for white and 3kg boxes for brown. It is envisaged the Company shall pack around 15% into pre pack once full production is reached.

Build
Adelaide Mushrooms was responsible for everything from the floor down including water piping, drains, underground power nd all cement work while Christiaens were responsible for everything above the floor including outer building, panelled rooms, Air units, plant and equipment. After initial planning was detailed the actual build took 18 months in the main to complete. The New Facility Adelaide Mushrooms embarked on the new facility because it’s Chairman Douglas Schirripa believed that to grow the best quality mushrooms consistently it was required to have the best tools for growers to perform.

The actual farm is an easy to operate, clean, open facility making operation easy and quick. This way it is believed less mistakes can be made, effective use of all operation equipment can be utilised and a regime of good OH &S and Quality Assurance practises could be implemented and sustained. Furthermore, it gave employees of the Company a State of the Art farm in which to work lifting the profile of Mushroom growing, not only for employees but to customers, supermarkets, and consumers alike. Because of the size and the high tech nature of the new farm it helps in dealing with Government and Members of Parliament. By lifting the profile overall it gives way to increase demand and sales and a confidence in using mushrooms by all.

Christiaens
Adelaide Mushrooms chose Christiaens to build the new farm for a few reasons. Firstly we have had a good working relationships with Christiaens since 1998 when we first starting buying equipment from them. Being 12,000 miles away in Australia we need to be assured of quality products which would last and operate well. Then in 2006 we build nine new phase 2 and 3 tunnels and these were successfully built and with the minimum of hassles. At the time of our planning Christiaens were capable of building, supplying air and computer equipment and also the naturally the machinery for the whole project. It made sense to go with a Company that we knew and was big enough to carry out a project of this size.