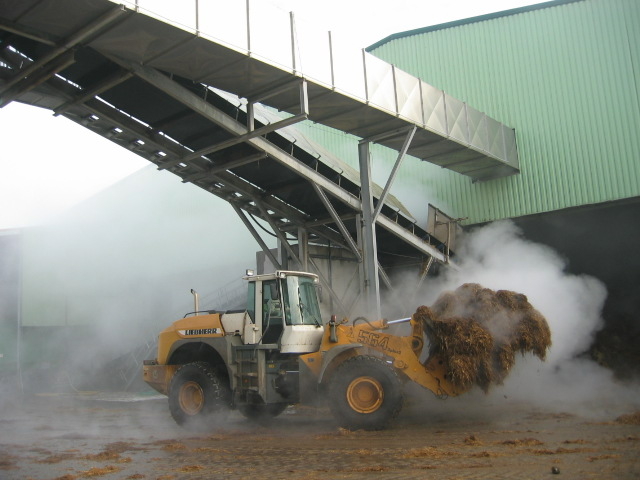 Bio-Fungi was producing Phase II compost in bags out of 3 tunnels of each 180 tons of Phase I compost, together with 3 small open air bunkers and an aerated floor. According the latest technology and regarding environmental requires Arpad Mutsy emphasized his expansion plans. Covering the complete prewet area and aerated floor building 3 indoor tunnels of 750 tons of Phase I compost a new state of art biofilter and biowasher (built with support of a Life Program) expanding the phase II/III facility. The investment program started September 2003 and most of the developments have been finished in December 2004.We started producing more compost since the middle of last year and increase our production slowly. From October 2004 we produce Phase III compost as well. The investments of the biowasher and biofilter are still going and the trail period will start June 2005. At this moment the market needs partly Phase II and partly Phase III compost. Basically we produce 900-1000 tons of Phase I compost weekly. We have a personal relationship with the Christiaens Key Management. We choose the Christiaens Group because we have been very satisfied with our first investments with them and we have a good working experience with their Technical team. The advantages of the new project can be summarised: updated newest and most modern facility modern environmental execution new investment fulfil all the requirements of such as call BAT-technology (Best Available Technology)

Bio Fungi KFT was established in 1991 by Attila Mutsy and Attila Sugar, who were later joined by Arpad Mutsy. This new company built upon the expertise of Mutsy Senior, who in the past had already been a successful composter and mushroom grower in the former Yugoslavia. In the late 1990s, the first plans were drawn up for a new composting company. Following a cautious start, with 3 aerated floors, 3 pasteurisation tunnels and after unremitting efforts, the company was gradually expanded to reach its current size: Pre-wet: Fully covered storage and mixing hall with aerated floors. Phase 1: 5 aerated bunkers with overhead filler for the production of approximately 2,200 tonnes per week. The air from both installations is cleaned and transported to a straw filter. Phase 2/3: Modern tunnel plant with 24 tunnels, a bag filling line, a block filling line and a truck filling system. At present, approximately 85% is delivered as phase 3 substrate, the majority of which is delivered in blocks or bags and a small portion of which is delivered in bulk. The sales market is primarily located in Hungary, Slovakia, Croatia, Bosnia, Serbia and Slovenia.