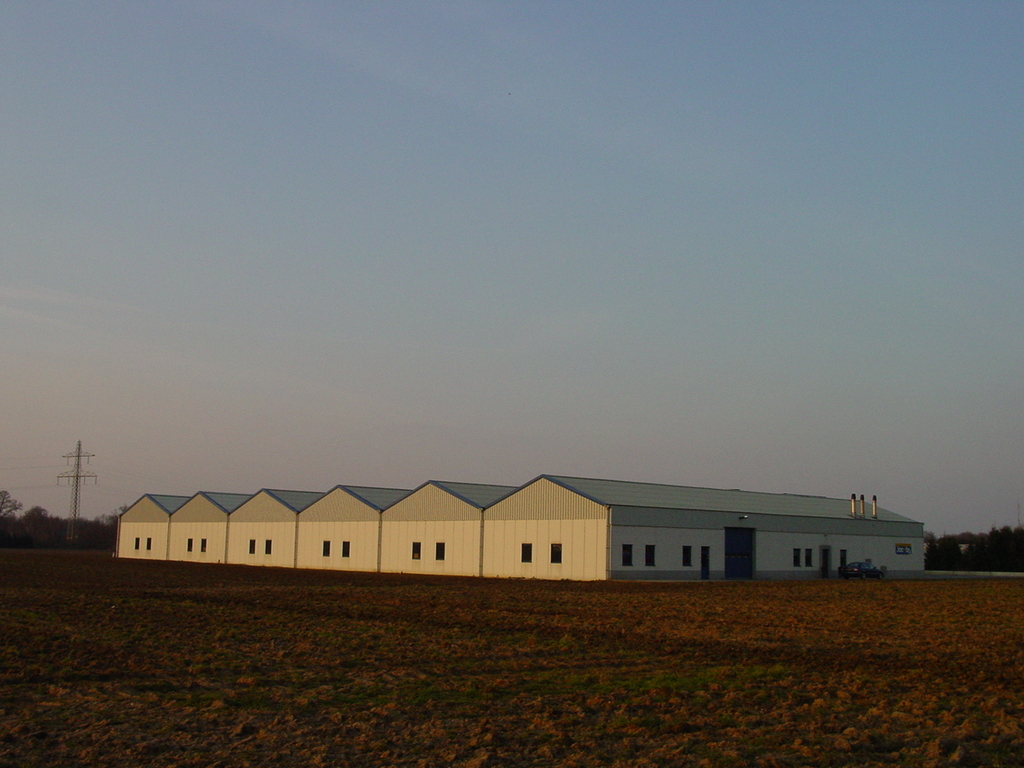 In June 2004 John Jacobs finished the expansion of his mushroom farm.
The expansion consist out of expanding the growing surface of the rooms
from 770m2 to 1.075m2.The bed width changed from 1,34mtr to 1,60mtr
and he went from 6 beds high to 7 beds high. The Christiaens Group
delivered the shelving, the technical installation and the machinery. The
total time needed for this expansion was 10 weeks.
Each week they rebuild one room. At this moment we have a weekly
capacity of 80-95 tons of mushroom. This is depending on the growing
schedule. The advantages of this expansion was the more efficient way of
working, in the past he had 2 farms, and a higher quality and production.
The reason for choosing for the Christiaens Group were the good
cooperation which we had in the past. Another advantage is building with
one partner, if there are any troubles you have only one person to
approach. Also the three companies have an efficient way of working
together.
Champignonkwekerij Jacobs BV is a mechanical harvester and grows
mushrooms for the canning industry for several years. To achieve a better
efficiency with the economy of scale Jacobs decided to expand. In the end
of the nineties the first 6 rooms of 775m2 were build. A couple of years later
Jacobs expand to 10 growing rooms. The width of the shelve was increased
from 1,36 to 1,60 to get more growing area into the building.
In 2006 another 4 rooms were built as well as the first rooms were renovated.
The last expansion is finished in 2012 with another 6 growing rooms. At this
stage the total growing area is 20 rooms of 1075m2 each.
During this expansion we focussed on energy saving. We have installed a heat
pump system. The heating coils of the existing rooms were equipped with
a bigger circulation pump to make sure enough heat is going over the coil
while the water temperatures in the systems are lower. Heat from the heat
pump goes towards the technical room. When there is not enough heat the
hot water boiler will add extra energy towards the system and from there it
goes towards the air handling systems. The cold energy is transported directly
towards the air handling units. The heat pump is connected to a big buffer tank
as well as the 2 existing cooling machines. A PLC is managing a master slave
control. First the heat pump is activated and when it doesn’t bring enough
cold energy the next cooling machine is started etc.
In this concept we have placed the heat pump into an insulated sea container.
The insulation makes sure the machine is frost free and the noise is reduced.
On top of the sea container we have placed the cooling tower which destroys
the surplus of heat. Depending on the location of such a system it has a COP
of 3,5 on the cooling side and 4,5 on the heating side. Even in the summer
there will always be heating needed for dehumidification so such a system
will bring energy savings during the whole year
Project overview