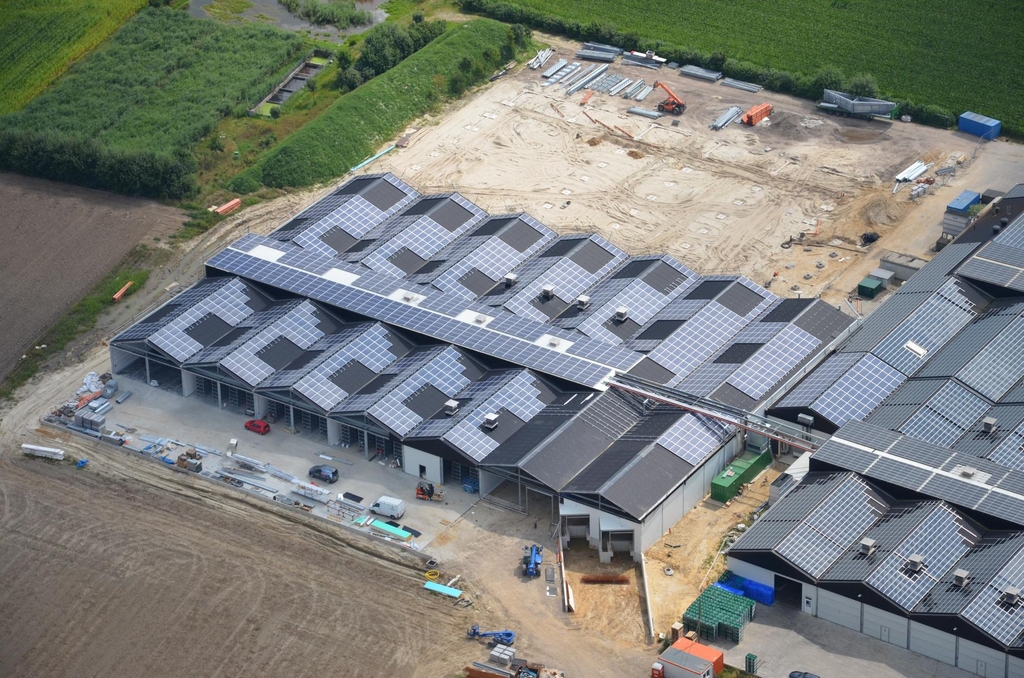 In early 2004 we started building the growing facility run by Marco
Deckers. This company is planned next to the current group of buildings
owned by his father Hans Deckers. Total construction time is scheduled
for 6 months so the first mushrooms can be harvested in July. The growing
rooms are based on production of 40 tons of fresh mushrooms weekly.
The motivation to choose the Christiaens Group as the construction
partner was the more than satisfactory experience of working together
on previous projects.
The new facility will comprise 5 growing rooms of ± 1300m2 including an
area where the freshly picked mushrooms can be packed on site. Each
growing room houses 4 rows of shelving of 1.2 m wide by 45 m long. The
growing rooms are based on production of 40 tons of fresh mushrooms
weekly.
The greatest advantage of the new units is the low cost price, which
according to Hans Deckers is the result of the larger growing surface per
room, the narrow beds and the use of the latest harvesting techniques
that considerably reduce picking costs.
The company was founded in 1974 comprising 4 growing rooms. Almost 40 years
later it is one of the most modern manually harvesting companies in the region.
In 2004 we started up a new facility for Deckers in Germany. The first stage
consisted out of 5 growing rooms of 1296m2 each. In 2006 we doubled this farm
to 10 growing rooms in total. Last year we doubled the farm again to 20 growing
rooms in total. We have realised this expansion into 2 phases of each 5 rooms.
We started with the groundwork in April 2012 and filled the first room in August.
The second phase was started right after and was filled in November. The farm
produces about 150 tons of mushrooms per week.
Each room has 4 shelve rows of 6 level high, 45 meter long and 1,2 meter width.
The farm is equipped with self-driven hydraulic harvesting lorries. For the middle
aisles we have self-propelled lorries which are driving over the floor. These lorries
makes it also much easier for the selective picking and greasing. This improves
yield and uniformity of the product.
The new technical installation is combined with the existing one. We have placed
2 heat pumps to supply the new expansion with cooling and heat energy. In the
summer period the heat energy will be used first in the farm and what is left
will be destroyed with the cooling tower. The heat which is extra required in the
winter time will be added by the existing hot water boiler. Having 20 growing
makes it easier to spread the production as well as spreading the cooking out.
Therefore we could realise this expansion without an additional steam boiler.
Germany has a supportive program for producing green energy. This made is
feasible to cover the roof. The whole roof of the farm is covered by solar panels.
A mushroom farm in general has a relative big roof which makes it interesting
to install the solar panels.
To reduce the risks for infection the farm is designed to cook out the empty
trays coming into the farm. Also the short cycle of 5 weeks and a good hygiene
management makes it possible to work without chemicals.
All mushrooms are packed on the farm and sold via Rheinland Champignons,
an associative company. Also mushrooms from others are packed and sold.
Deckers company is driven by market demands.
Project overview