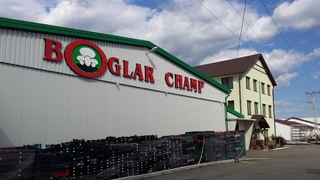 Boglarchamp is market leader in Romania. In 2010 Boglar started to build a new Dutch style mushroom farm consisting of 9 growing rooms of 820m2 each room. In 2012 this farm is expanded with another 9 rooms. In 2015 we finished an additional 8 growing rooms and we received recently the order to complete another 4 growing rooms by the end of 2015. This farm will be 30 growing rooms in total.