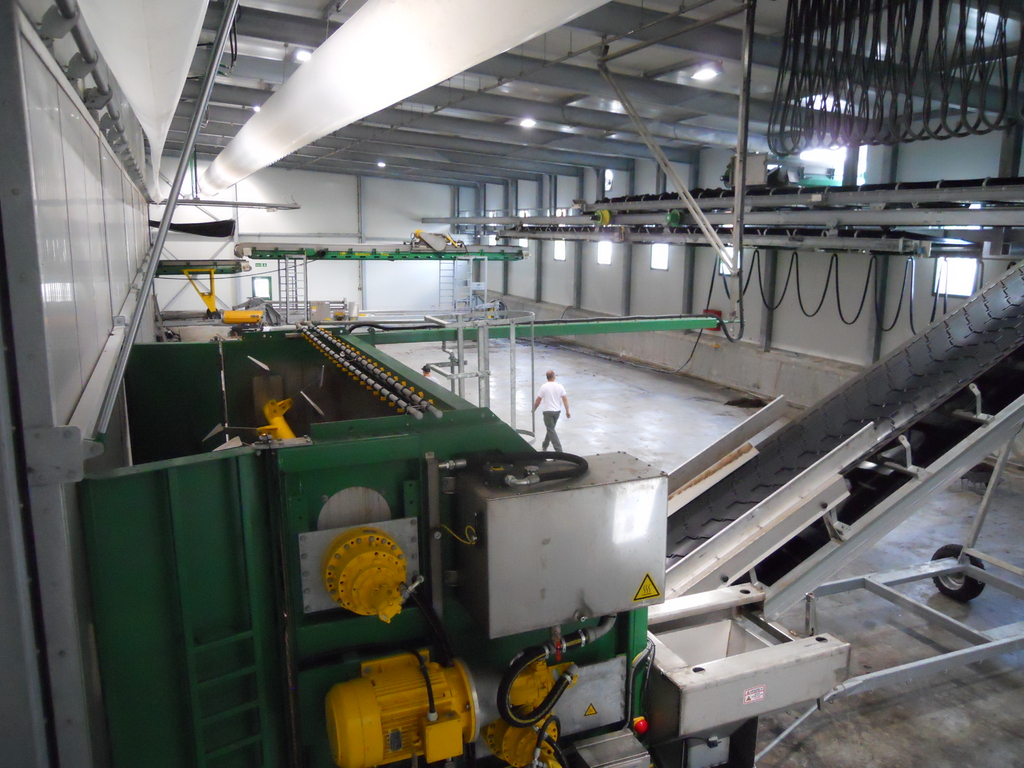 Growing
2007 saw the start of the construction of a modern shelf system farm.
The objective of this was twofold: on the one hand, the company wished to cease
growing in caves, because this was becoming increasingly inefficient, and, on
the other hand, the company wanted to build a model farm in order to convince
its clients that a modern farm was both feasible for them and offered the best
prospects for the future.
The farm was brought into production in May 2008 and was initially designed
with 6 medium-sized growing rooms, each of which incorporated four rows of
shelves, 6 beds high. The farm has a modular construction and the company is
currently working on a subsequent expansion.
Bio Fungi also markets approximately 30,000 kg of mushrooms per week, 85%
of which is cultivated by Bio Fungi. The primary markets for the mushrooms are
Hungary, Austria and Italy.
Bio-Fungi is one of the leading companies in the south east of Europe. Bio-
Fungi has a mushroom farm and a commercial composting yard. Last year Bio-
Fungi celebrated their 10 years anniversary. Since the beginning Bio-Fungi and
Christiaens are solid partners and we received many orders from Bio-Fungi.
In 2010 Bio-Fungi decided to build a new ‘state of the art’ facility for producing
Phase 2 and 3 compost. Christiaens was the partner to build this new facility.
Together with input of Bio-Fungi we have upgraded the whole tunnel concept
to a higher level. Focus during the design stage was mainly on hygiene,
energy efficiency, work efficiency and last but not least composting efficiency.
For hygiene we have changed b.e.:
• Easier cleaning of the mezzanine, floors, drainage, building and machines
• No driptrays inside the tunnel
• Supply of the washed and filtered air towards the technical installation
Energy we will safe by b.e.:
• Energy efficient fans
• Efficient adiabatic cooling system
• Efficient water cooled cooling system
• Bigger filter frames
• Cooling coils with less resistance
• Optimised computer control
• Much more open grids
Work efficiency is achieved by b.e.:
• Remote control of the revolving doors and machineries
• Easy to clean the machineries and building
• Fast filling (up to over 300 tons per hour)
• Less spillage in the installation
A higher compost efficiency is achieved by an optimal design of the airhandling,
control and tunnel box.
We would like to explain more about above mentioned features of the facility.
Furthermore the facility is equipped with a sophisticated truck filling station of
which a weighing bridge is right underneath the truck. This makes this operation
more efficient as well.
The old tunnel facility of Bio-Fungi is made out of gas concrete panels.
The reason why Bio-Fungi chosed for a panel building are obviously. Panels have a
much better insulation than gas concrete, the maintenance costs are less and the
stainless steel surface on the inside is smoother and is therefore more hygienic.
Recently Bio-Fungi gave us the order for expanding the compost facility as well as
their growing rooms.
Bio Fungi is ongoing expanding their businesses.
The bunkers are expanded with another 3 pieces. At the moment Bio fungi has
10 bunkers each with a capacity of 750 tons of Phase 1. The recently build ‘state
of the art’ 9 tunnel facility is also expanded with 3 tunnels. In total Bio fungi
consists out of 24 gas concrete tunnels and 12 insulated panel tunnels. Another
additional 5 tunnels will be build in 2013.
At the growing farm 4 new rooms are build and counts in total 12 rooms of each
864m2 growing area. At the farm the latest technology is implemented with
automatic watering system integrated in the shelving. All air handling units are
equipped with a pre heating / cooling coil. This coil is connected to the heating
and cooling circuit and the grower can choose if this coil is used for pre heating
during the winter period or pre cooling during the summer period.
Mid 2013 a modern packing house and expedition hall including offices will
be commenced. Read also about Bio fungi in Bulletin number 11 and at their
website.
Biofungy, Oyster facility, Hungary

Currently Biofungi is building an oyster farm with 12 growing rooms. Christiaens is supplying the climatisation for these rooms. The climate systems are specially designed to create the best climate and to be able to clean easely. Besides hygene spores have a big influence on the capacities of the cooling and heating. Therfore good acces and cleaning possibilities are crucial for a year round production.

The expansion of the composting facilty kept going. The last expansion was adding another 7 tunnels.