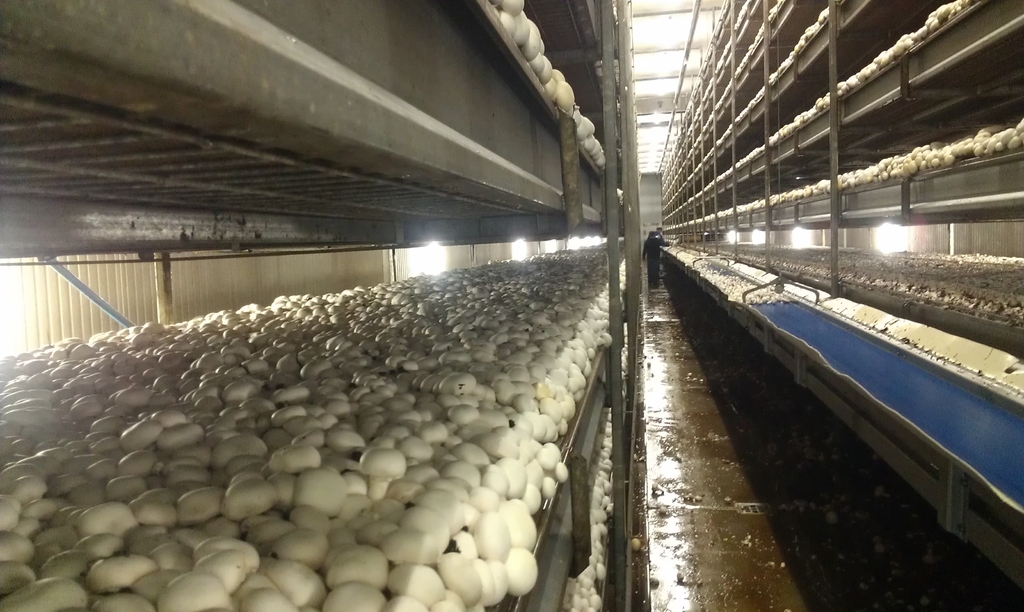 Champignonkwekerij Cox has been growing mushrooms for the canning
industry for several years. The farm already had 2 mushroom farms before they
decided to expand with an extra farm. The decision to build 8 growing rooms
of 1382 m2 each was taken in November 2006. Each room has 2 rows of
shelves, 8 levels high.
In week 9 of 2007, the building of the new farm started with the groundwork.
The first fill took place in week 37. Initially this had been planned several weeks
later but due to good organisation and efficiency the schedule was shortened.
The design is based on mechanical harvesting in combination with a 4-week
growing schedule, resulting in an expected weekly production of 95 tons. The
advantages of this new farm are a larger working space, central processing of
the mushrooms and a covered compost hall which gives good working conditions.
The high level of mechanisation enables improved productivity as well.
Before making the decision to work with the Christiaens Group, Jos Cox, the
director of Cox, visited several farms. “The reasons for choosing the
Christiaens Group were obvious. The farms built by the Christiaens Group
looked very good and reliable. And the fact that this company handles all three
disciplines gave me a comfortable feeling. Not only that, they offered me a
good, competitive price for the materials and services they provide. I think that
the Christiaens Group is the only partner which can handle such big turnkey
projects”.
Champignonkwekerij Cox BV grows mushrooms for the canning industry for
several years. To make the former investment in the sorting and processing
line more efficient, Cox decided to expand their facility with another 8 growing
rooms. During 2011 we have doubled the mushroom farm and in 2012 the
farm expansion produced the first mushrooms. The farm counts nowadays
16 growing rooms of 1382m2 each and is able to produce about 200 tons of
mushrooms per week.
The farm has double harvesting systems which will work simultaneously. With
the expansion of the central energy systems we have added a heat recovery on
the chilling system. Heat from the chiller is put back into the heating system
and is added up by the hot water boiler if needed.
Before making the decision to work with the Christiaens Group director Jos
Cox visited several farms. “We were very satisfied about the Christiaens Group
in the previous project so it was no discussion to go ahead with them for the
extension as well.”
Project overview