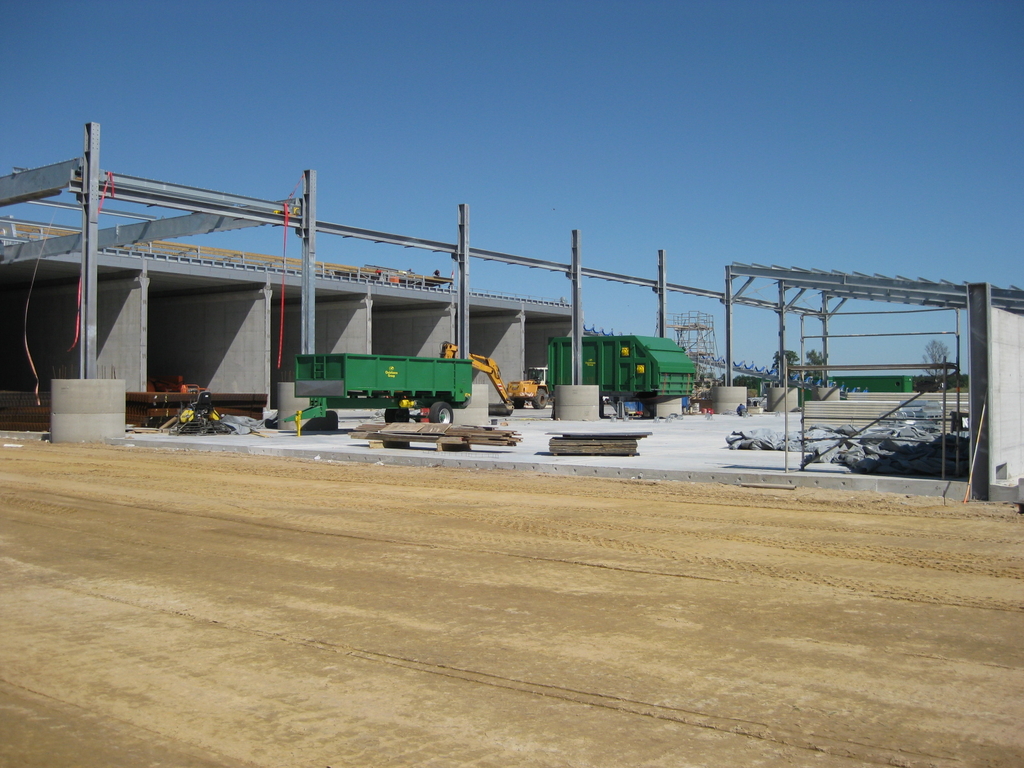 The company Dohme Pilzzucht GmbH is located in Tietzow – Germany,
nearby Berlin and is a part of Havelland-Champignon. Dohme already made
his own phase 2/3 compost in the past and was buying phase 1 compost
somewhere else.
To be able to produce the complete cycle of compost locally, the decision was
made to build a state-of-the-art phase 1 facility. The project includes 7 bunkers
with an overhead-filling-system and a capacity of 700Ton compost each
bunker.
The technical installation is equipped with several features for an optimal
process. Some building details are changed to the latest demands.
Last but not least, the way of mixing the compost before it enters the bunkers
is improved to achieve the best mix of basic materials without losing the
structure. With a mixing drum edit to the filling line, the customer is able to
handle the straw and compost as required.
All together this means a big benefit for choosing 1 partner for this project,
which lead to a most efficient and integrated project in all its facets.
Because of the experience of the Christiaens Group, the flexibility of improving
existing building techniques and therefore raising the bar to a new level, the
benefit for the client to be able of buying everything at one company, add to
that the good relationship and trust, the Christiaens Group was selected as
turn-key supplier.
Turn-key means in this case that everything is included in the order, form the
pipes underneath the concrete floor till the roof, and everything in between.
Because of the high and specific demands of Dohme, this project will be a
bench mark for the Christiaens Group for the future. Therefore the Christiaens
Group is very proud they had the opportunity to build this beautiful turn-key
project together with Dohme.
For more information please visit the website.
In 2012 Christiaens was occupied with building the new phase 1 facility for
Dohme. Seven Phase 1 bunkers have been build, five process bunkers and two
bunkers which can be used as a straw/bio filter.
When bulletin 11 was published last year the new facility was about to start
up. Already during starting-up the major improvement of this latest state-of-the-
art standard was obvious for everybody.
Now 1 year later still everything runs fine and experience is been gathered
since. We like to give you some inside information from some examples what
have been improved.
For the building the concrete bunkers were better re-enforced, and also the
shape of some critical items was changed. The choice of materials is improved
due to the hard conditions (with ammonia). The way the doors will be closed
is easier and therefore life time will be longer. Heat recovery for the energy
which the compost will provide can be used on other locations. Temperature
and Oxygen sensors are easier to guide inside the bunker. Also there was extra
attention to some items multiple functions, therefore it is possible to raise the
quality of these items but control the expenses.
For the climatisation the same thinking was realized due to quality and
multiple functionality. Because the bunkers are closed with doors the compost
can be better controlled (less influences from outside like rain, wind, sun and
temperature) and process air can be reused.
The hot air (with ammonia and of up to 80 degrees) can be reused back into the
bunker or fresh (cold) air can been blown into the bunker or a combination can be
made with a mixture of air. The warm process air can also be blown trough the
bio/straw filter or directly to the outside via a chimney.
The frequency controllers, the process computers and the central electrical control
box are placed in a separate insulated container which is been feed with fresh air
to enlarge the lifetime of all equipment.
The concrete working area is been poured under a slope, and the waste water is
therefore been guided to a central collecting point. With a filter the bigger parts
are filtered out of this gully water. The gully water will be collected in a big tank
with controlled aeration.
For the machinery the choice was been made to place a big Christy Floor hopper
in the middle of the working floor to keep the loader driving distance as short as
possible. To be sure that mixing will go easy, the decision was made to pay extra
attention to be able to pulverize the chicken manure, therefore a lot of shredders
were integrated in the system. On several locations gully water or fresh water can
be added to have better spreading and more flexibility in the system.
After all basic materials are been feed onto a big conveyor, everything is been
guided into a new developed mixing drum. With this mixing drum everything is
been mixed very properly (see the other article in this bulletin) By means of an
extreme improved overhead filling system the compost is been spread in rows into
the bunker.
All these improvement are only a summary and many more are been realized
at Dohme. We like to explain you all the possibilities which can be used at your
compost plant.
Project overview